Is your A/C system or roof to blame for high energy bills?

Is your A/C system or roof to blame for high energy bills? 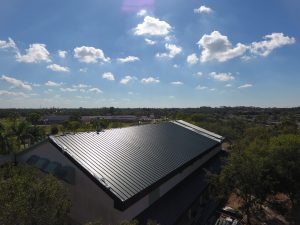 The summer of 2020 is shaping up to be one of Southwest Florida’s hottest on record.

Is an inefficient A/C system to blame? In many cases, A/C systems are working precisely as designed, but they’re fighting a losing battle against solar radiation. During the day, heat can enter a building through its walls, windows and doors, but most A/C systems can handle that. Solar gain through the roof, however, poses a bigger challenge.

A roof has three factors inherently working against it: (1) A roof is rarely in the shade; (2) It has large square footage; and (3) It often is positioned close to a 90-degree angle to the sun, thus taking a direct hit from dangerous UV rays and heat that pound a roof all day. Interior spaces can be heated from the top down. Just above the ceiling, temperatures can reach upwards of 150 degrees, essentially creating an oven right above the space where you’re living and working. That inevitably triggers the A/C to kick on again and again.

Roofing technology has dramatically improved in recent years, however. Engineers have developed roofing materials that are more durable, weather-resistant and eco-friendly. In fact, all types of roofs – flat, metal, tile and shingle – now can qualify for the coveted Energy Star rating from the federal government, and possibly qualify for tax incentives or rebates.

According to CertainTeed, Energy Star’s guiding principles for roofs include significant energy savings, increased energy efficiency without compromising performance, recovery of initial costs within a reasonable period of time and verification of performance through testing.

Many of Target Roofing’s eco-friendly customers have chosen metal roofs, which are known for their durability, weather resistance and energy efficiency. Metal reflects solar radiation, sending the heat back in the other direction. That keeps space between the roof and ceiling cooler, which in turn keeps living and working spaces cooler.

For flat roofs, thermoplastic polyolefin, or TPO, is popular because it is durable, energy–efficient and mold resistant. The roofing material has a reflective surface that repels heat and is UV resistant. For pitched roofs, barrel tiles create a natural air space that reduces heat flux transfer, thus keeping the sun from directly hitting the roof deck. Even asphalt shingles have been re–engineered to include tiny granules that reflect the sun and reduce heat absorption.

Many roofs have an expected life cycle of about 15 to 20 years. That means structures built during Southwest Florida’s building boom of the mid-2000s might be due for a new roof, and with advances in technology, it’s a good time to consider that upgrade.

FPL estimates that air conditioning accounts for more than 50% of monthly energy costs during the summer. That’s why it is so important to have a roof that keeps energy costs in check. Call Target Roofing today at 239-332-5707 to discuss upgrading to an energy-efficient roof.

Ever wonder why flat roofs are white and others are not?

10 qualities you want in a commercial roofing company

Sunburned roofs? How Florida’s heat and sunshine take a toll on your roof